Introducing the New Grantee Partners of the Red Umbrella Fund

The Red Umbrella Fund received 130 eligible applications from sex worker-led groups and networks during our Global Call for Applications last year. All these applications were reviewed and scored by our 11-member Programme Advisory Committee (PAC) and, after many days of deliberation among the sex worker activists, 26 groups were selected for a new grant. We are thrilled to announce that the total grant amount for all our new grants in 2017 was just over 1 million US dollars!

In fact, since the creation of the Red Umbrella Fund in 2012, we have made 129 core funding grants to 91 different groups and networks for a total amount of just under 4 million US dollars.

In the selection of grantee partners, the Programme Advisory Committee always confirms that the final selection reaches a diversity of groups and networks, including those working at local level, like Sex Workers Advisory Network of Sudbury (SWANS) in Can 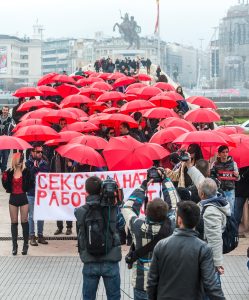 ada or Asociación de Trabajadoras Sexuales Trans de Quito in the capital of Ecuador, those working more at national level, like All India Network of Sex Workers (AINSW) in India, Desiree Alliance in the US, and Organización Nacional de Activistas por la Emancipación de la Mujer (ONAEM) in Bolivia, as well as those working at regional level such as RedTraSex in Latin America. As well as a diversity of reach, the PAC ensures that groups that work with women, men and trans sex workers are all included. Some new grantee partners have a more specific focus, such as Ashraya in India that works with sex workers who are living with HIV or Rainbow Mirrors Uganda that focuses on young trans sex workers. Another grantee partner, TAMPEP, was recently transformed into a regional network of migrant sex workers in Europe.

The grantee selection includes some groups that are relatively new (two years old or less), such as the Surinamese Coalition of Sex Workers (SUCOS) in Surinam and the migrant sex worker group Red Edition in Austria. About one in three grants are made to groups that are not formally registered, like Asociación de Mujeres Liquidámbar in El Salvador. Reasons for not being registered can be multiple; sometimes it is a political choice of the group, in other cases the registration process is complex, lengthy, or registration is simply denied to self-organising sex workers. For just over one-third of the grantee partners, like for Strumphet Alliance Network in Fiji, this is the first international grant the group has ever received. Other groups, like Organisasi Perubahan Sosial Indonesia (OPSI) in Indonesia and Parapli Rouz in Mauritius, have more experience with international funds but need the Red Umbrella Fund grant to support their organizational development and human rights advocacy costs that are hard to cover with the restricted project and services-focused funding more commonly accessible to them.

Whereas all grantee partners work in countries where sex work is highly stigmatized and criminalized one way or another, the safety concerns differ greatly per country. In some countries violence against sex workers is extremely high, and some groups have a strong focus on violence prevention and trauma healing services. Many leaders in the movement have shared receiving threats or direct violence related to their public identity as a sex worker. This risk is often further increased when someone also identifies with or demonstrates support to LGBTQ communities. Arbitrary arrests, police abuse and brothel evictions are common among many of our grantee partners. HIV/AIDS Research and Welfare Center (HARC) in Bangladesh, for example, has organized strongly around brothel evictions. Numerous groups limit their online presence, and one of our grantee partners remains anonymous in our communications to prevent potential repercussions.

Other groups put in much effort to increase their public visibility. Macedonian sex worker organization STAR-STAR, for example, has organized impressive demonstrations full of red umbrellas and, in December 2017, attracted visibility through their Skopje Red Light District art performance as shown in this video. Also Men Against Aids Youth Group (MAAYGO) in Kenya, Sex Worker Advocacy and Resistance Movement (SWARM) in the UK and Unidas en la Esperanza (UNES) in Paraguay have used video as a tool to get their messages out. AMMAR Cordoba in Argentina consistently shows their presence at demonstrations, events, and local festivals and markets.

We are proud to have been able to contribute to getting more and better money to the sex workers’ rights movements, and we thank our institutional and individual donors for their support. But it is also clear that there is a still a significant gap for the movement in accessing the funds needed for their organizing and activism. For two-thirds of the grantee partners, this is their first grant from the Red Umbrella Fund.

“It is exciting to have a fund where we, sex workers, are in the driver’s seat but also very difficult. Each year, we make new grants to sex worker groups in different parts of the world and these groups do such great and important work. But it also means that each year we have to say ‘sorry you were not selected’ to the majority of the groups that apply and this is hard. We know how hard it is because we have that experience too.”
– Tara Burns, International Steering Committee (ISC) of the Red Umbrella Fund

Whereas it is great to be able to support new grantee partners, it also means opportunities for longer-term partnership from the Red Umbrella Fund have not been available for all groups that we would have liked to continue to support.

Additional introductions and information about the new grantee partners can be found on the Red Umbrella Fund’s Facebook page.