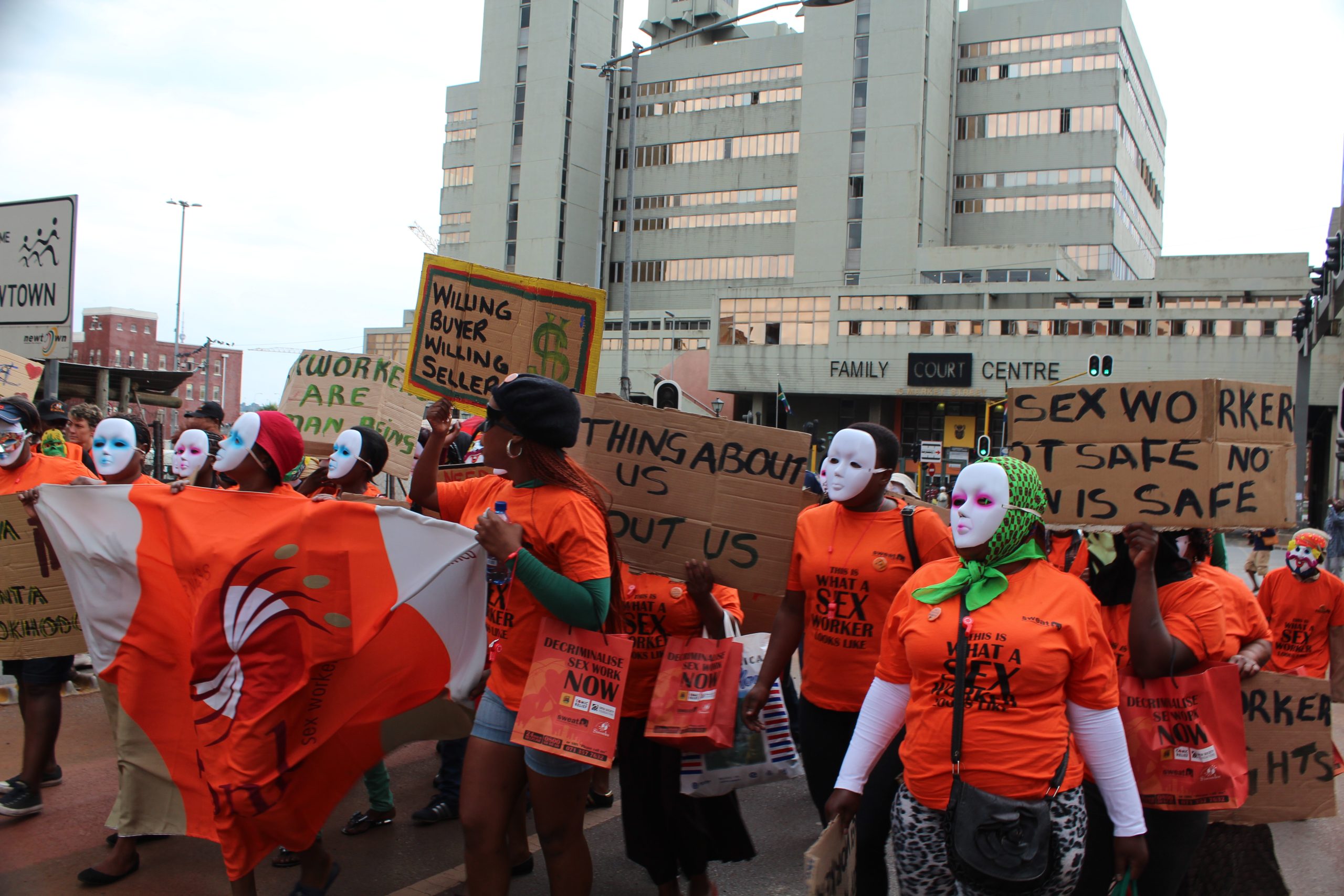 Thuli Khoza, Coordinator of Sisonke Durban and member of the Red Umbrella Fund’s peer review panel in 2014, speaks to Zoe Bakker about the daily work involved with being a regional branch of South Africa’s sex worker movement. Specifically, she shares important insights in the unique context of the Durban and KwaZulu-Natal (KZN) area and the successes and struggles of their work.

Created just over ten years ago, Sisonke calls itself the National Sex Worker Movement of South Africa. With its headquarters in Cape town, the organisation has used the core support from the Red Umbrella Fund (2012 – 2013 grantee) to expand its network to seven provinces, strengthen its organisational and network structures, and plan towards independence. Sisonke provides information to sex workers on accessing social services, such as health care, and on working with the police and court system. The group offers workshops on sexual health, leadership and human rights and advocates for the decriminalization of sex work.

“Each province has their own story to tell. Some of them are similar, some of them are very different. With me having been around in five provinces already in South Africa, I have found that all provinces are different in their own way. In Johannesburg you will find a lot of brothels and you find sex workers everywhere, whereas in Durban they are mostly on the streets and in private houses and massage parlours.”

For the sex worker movement this means that these unique contexts call for unique approaches in the various regions, which is one of the reasons that Sisonke National decided to expand and set up branches to be visible in various provinces.

The core of Sisonke Durban’s activities are the monthly Creative Spaces, where sex workers come together and talk about issues they face in their work, as well as issues in their personal lives at home with their families. These creative spaces offer an opportunity for sex workers to openly discuss topics of their interest. Every month, a different theme is taken up for discussion, ranging from strategies on how to deal with discrimination and violence to debates regarding alcohol and substance abuse.

Over the past one-and-a-half years, since Sisonke Durban’s inception, peer educators and paralegals at Sisonke have gained the trust of the sex workers in their community. They see their empowerment efforts paying off: women sex workers are increasingly standing up for themselves, facing police violence. They have now expanded their work to other parts of the province as well.

“KZN is big. It was high time that we moved to the next city, the next place, so that we do not only focus on Durban, because there are sex workers everywhere. This is beneficial, as many sex workers throughout KZN have heard of Sisonke’s work, but have not yet had the opportunity to meet Sisonke’s peer educators and participate in the Creative Spaces.”

“As sex work is illegal in South Africa, the police do whatever they want to us, and that leaves us in a vulnerable situation where anyone just takes advantage. People who are involved in crime, like robbers, drug dealers, take advantage of that situation.”

Sex workers are unable to report the crimes and violence against them as they will be questioned extensively as to what they were doing and why they were there in the first place. 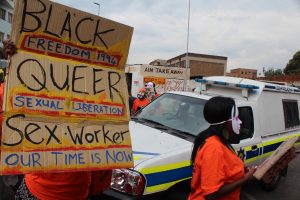 The challenges Sisonke Durban have to deal with to address the violence against sex workers can be intense.

“We have had two major incidents with white dominated communities… I remember this one experience, where we tried our best to have a dialogue with the residents in an area where sex workers work and it turned out to be a very bad dialogue… it became a big issue, with fights and with us being chased away.”

Thuli further describes that residents neighbouring the areas where sex workers are active, had started writing down the number plates of clients, which “obviously is bad for business”. Residents claimed that the clients do not reside in the area but come from far away. However, as Thuli states:

“Sex workers work where there is a demand. If there is no demand, they will not be there.”

This conflict puts sex workers in a difficult situation, whereby violence and crime is seen to increase.

Another challenge Sisonke Durban is facing illustrates the importance of sensitization when working with sex workers for HIV/Aids prevention purposes, which is particularly relevant for the KZN region where HIV prevalence is recorded to be the highest (37,4% in 2011) throughout South Africa. In recent times, there has been some crumbling of trust among sex workers that Sisonke Durban’s peer educators and paralegals have been working so hard to build. As Thuli explains, a relatively large amount of funding is currently going to organizations with HIV/Aids and TB prevention programmes. Many of these organizations have not worked with sex workers in this area before and have not been sensitized on how to work on sex worker issues. Feedback from sex workers illustrates that confidentiality is not always respected properly.

However, Thuli is hopeful. Sex work, as a sector, has recently been included within the South African National AIDS Council (SANAC), which strives to bring together government, civil society, and the private sector to create a collective response to HIV, tuberculosis (TB) and sexually transmitted infections (STIs) in South Africa. Thuli is the representative for sex workers within the Council. With the launch of the national strategic plan for HIV prevention, care and treatment of sex workers last year, SANAC even came out to state that they support the decriminalisation of sex work. Thuli concludes:

“We are going somewhere, slowly but surely. Everything is written but not yet practiced.”

By Zoe Bakker for the Red Umbrella Fund

An adapted version of this blog is published by HIV Advocates here. 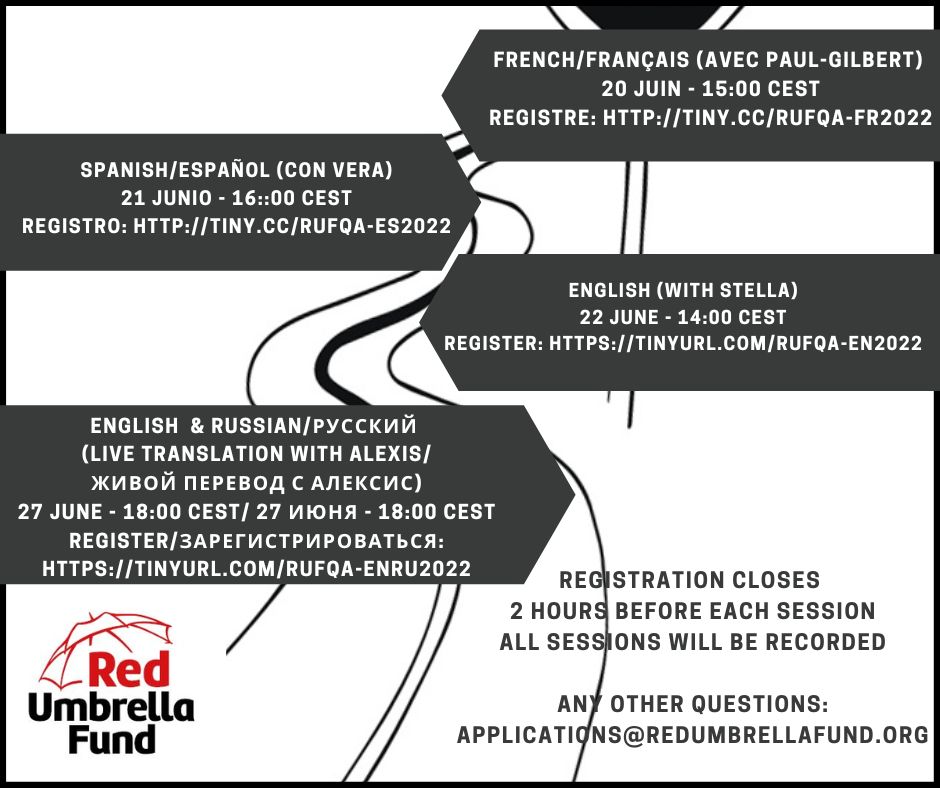 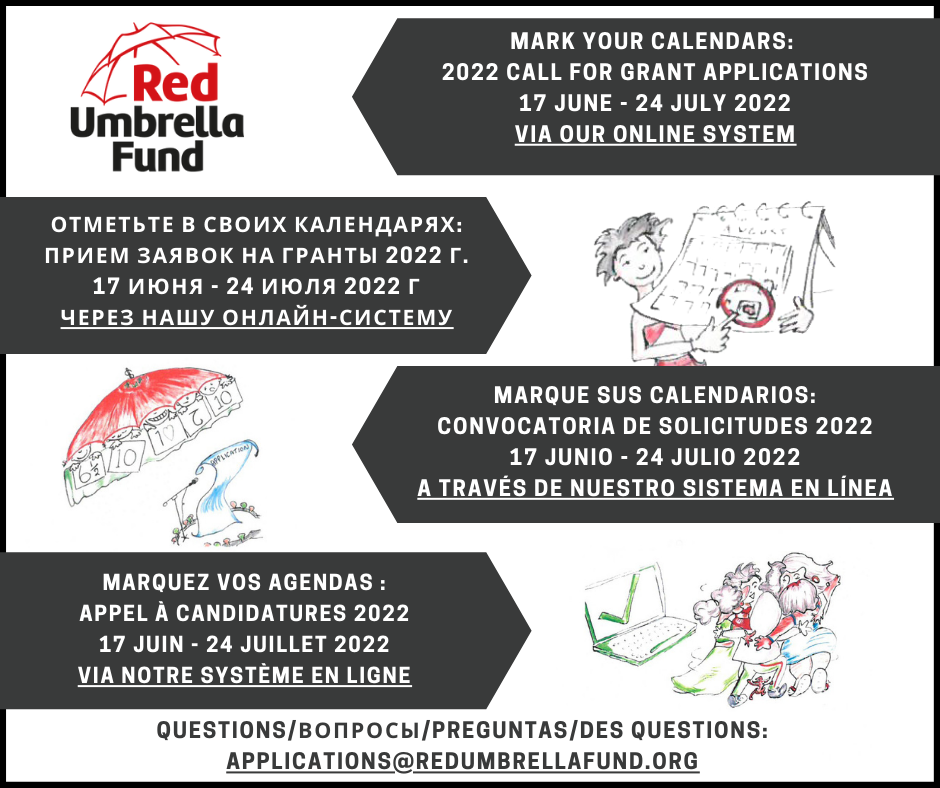