Each year on 17 December, the International Day to End Violence Against Sex Workers, sex worker rights activists and their allies come together to remember the colleagues they have lost and bring attention to the need to end the stigma, discrimination and violence against sex workers. It is time for more funders to speak out in solidarity and provide more and better funding. 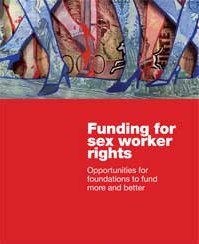 Sex workers around the world face high levels of stigma, discrimination and violence. In many countries, sex workers have organised themselves to speak out against the injustices they face and demand that sex work be recognised as work and that sex workers be recognised as persons before the law. Many sex workers are human rights defenders who reach out for support and solidarity and advocate for legal and policy changes that will improve the well being of the women, men and trans people active in the sex industry.

“Sex workers tell me they are fed up with being seen as victims. Sex workers do often get exploited. Not because it is inherently part of the job, but because their work is criminalised and their working conditions unsafe. This feeds stigma and discrimination and hinders their access to health, social services, and justice,”

says Nadia van der Linde, Coordinator of the Red Umbrella Fund which aims to support sex worker-led organisations to stand up for their rights and strengthen their movement(s).

But in order to make lasting social change the organisations that mobilize and voice the concerns and demands of sex workers need resources. To pay for meetings, trainings, research and materials. And although foundation funding for human rights has grown in the past years, the funding that supports organisations to stand up for the human rights of sex workers is still minimal. If we want to end violence against women, end the spread of HIV, end gender discrimination and labour exploitation, then sex worker rights organisations must be supported to speak up and invited to share their solutions.

In 2014, the Red Umbrella Fund partnered with Mama Cash and the Open Society Foundations to commission a mapping of global grantmaking for sex worker rights by public and private foundations and other non-governmental organisations (NGOs). The researchers contacted foundations and organisations working with sex workers to better understand what is being funded and to identify the main gaps.

They identified 56 foundations and NGOs that altogether invested a total of €8 million (US$11 million) in support of sex worker rights in 2013.

“The political struggle against criminalisation, the battle against violence done to us, the work of building organisational structures to link us and support us better – these are long-term efforts that need sustained steady financing”
– Sex worker organisation from Latin America, survey response

Because sex work is criminalised in many and stigmatized in all countries, organisations that speak out against the violence and exploitation experienced by sex workers and for improved access to health services for sex workers have a hard time getting funding from their government.

Foundation funding is crucial to support the human rights of sex workers and help build the movement.