In August 2013, sex workers representatives from thirteen states affiliated with the All India Network of Sex Workers (AINSW) launched a national campaign for the decriminalization of sex work with the ultimate objective to eliminate violence and exploitation of sex workers in the country. The aim is to amend the Immoral Traffic Prevention Act and ensure sex workers’ rights as workers.

Sex work as a profession is not recognized in Indian law. As a result, sex workers are not entitled to a range of public services, protection and benefits other workers enjoy. The working conditions in the brothels are poor and soliciting on the streets is not safe. As Smarajit Jana, adviser of AINSW asserts, “sex workers have to be considered as any other laborer.”

The current legal structure in India is composed of “anti-trafficking” laws designed to prevent the exploitation of women in the sex industry. It ignores the existence of male and trans (hijras or kothis) sex workers and considers all sex workers victims of trafficking.

The Karnataka Sex Workers Union (KSWU) has reported that during a police “raid and rescue” operation on Delhi brothels in 2008, twenty four women were classified as traffickers and fifty one sex workers as victims. However, it later became clear that most of these “so-called victims were adult women who chose to do sex work voluntarily.” In addition, the police operation neither improved the conditions in the brothels nor reduced the number of human trafficking cases but rather victimized self-identified sex workers.

The Immoral Traffic Prevention Act (ITPA) has much impact on the lives of sex workers in India but the law is contradictory in itself.

According to the ITPA, sex work performed in the private space is not illegal; yet it is an offense to live off the earnings of a sex worker. Children, siblings or partners of sex workers are prosecuted if they are over 18 years old and financially dependent. The definition of “public space” is so broad that it makes the compliance very difficult. This uncertainty in the ITPA provides a legal framework for police “raid and rescue” operations to arrest sex workers even when sex work is practiced in the private realm.

As AINSW vice president, Patel, points out: “sex workers are not doing anything illegal. Therefore, no one has a right to harass us or our family members because of the nature of our work.”

Violence against sex workers is a constant phenomenon that includes police extortion and torture. Sex workers are arrested, harassed and even raped by the police. Kusum, the general secretary of AINSW: “Police conduct raids and manhandle our children. They insult and beat us and treat us inhumanely and often trump up false charges. Violence by the police is the major problem in our profession and police are the major beneficiary of trafficking in the country.”

In March 2013, they sent a letter to the Ministry of Women and Child Development (WCD) sharing their critique of the IPT and their subsequent lobbying with parliamentarians has successfully prevented further harmful amendments of ITPA to be accepted. The Commission on Women Empowerment and Social Justice has since invited AINSW to be involved in developing policy to empower women, including sex workers, in the country.

AINSW is a national network of over eighty sex worker organizations from 13 states of India. It was formally registered in 2010. AINSW demands the recognition of sex work as work, combats police violence and aims to change laws that discriminate against sex workers. AINSW is a grantee of the Red Umbrella Fund.

This is crossposted from http://hivadvocates.net/advocacy-stories/reforming-policy/sex-workers-in-india-launch-a-national-campaign-to-end-violence-against-sex-workers

In 2012, as the result of lengthy and consultative processes, a number of UN agencies published two reports *) that recommend the decriminalisation of sex work to help address human rights abuses faced by sex workers, and call for better access to health services. 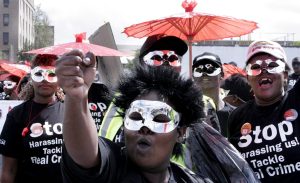 Recently, Equality Now, a USA based NGO working to end violence against women and girls, has critiqued this recommendation claiming that it is “in direct opposition to international human rights standards” and “jeopardizes efforts to prevent and address sex trafficking and promote gender equality”. Instead, Equality now prefers to promote the so-called “Swedish model” which criminalizes the purchase of sex services.

In response, local and international sex workers’ rights groups have issued statements in defence of their human rights. Red Umbrella Fund grantee Sisonke from South Africa has issued a statement in collaboration with the AIDS and Rights Alliance for Southern Africa (ARASA) and Sex Workers Education and Advocacy Taskforce (SWEAT).

“When Equality Now suggests “we listen” – who are they suggesting we listen to?”,

“I would like them to listen to me, and other sex workers who participated in the deliberations of the Commission [on HIV and the Law]. The Swedish model has failed, criminalisation does not prevent nor enable anyone to address trafficking – rather it enables stigma and drives violence against sex workers”.

In the statement, Sisonke addresses the many misconceptions raised by Equality Now and makes a case for a revised report.

“The UN together with a spectrum of experts, researchers and advisors have made knowledgeable and powerful recommendations based on hundreds of testimonies, and on evidence based on rigorous research. Its recommendations should be supported – not labelled as jeopardising gender equality.”

Sisonke presents itself as the national movement of sex workers in South Africa. Based in Cape Town, Sisonke currently has active representation in seven provinces and fights for the decriminalisation of sex work and improvement of working and living conditions for sex workers. The network’s activities comprise the mobilisation, organisation and sensitization of sex workers through outreach activities, trainings and workshops and campaigns on human rights. Through advocacy campaigns, public events and meetings, Sisonke has been successful in addressing issues of violence, discrimination and unsafe working conditions for sex workers. They have also secured better access to services and advocate forthe inclusion of sex workers in decision-making spaces.

Sisonke is hosted by SWEAT and is a founding member of the African Sex Workers Alliance (ASWA). With the one-year core grant from the Red Umbrella Fund, Sisonke is able to expand its work throughout South Africa and strengthen its internal structures by setting up a National Steering Committee of sex workers.

*) HIV and the Law: Risks, Rights and Health (2012), the Global Commission on HIV and the Law’s report published by UNDP and Sex Work and the Law in Asia and the Pacific (2012) by UNDP, UNFPA and UNAIDS.