Sex workers in Europe have been facing grave attacks on their rights in recent years. Although sex workers’ organisations are under-resourced, they are fighting back fiercely and have had some notable achievements in getting others to finally care and join in. Slowly but steadily, more people are starting to realize that the denial of human rights to sex workers, will ultimately affect us all. Or as the old labour slogan goes: an injury to one is an injury to all.

The Swedish Model Expansion: A Backlash against Social Justice

In February 2014, the European Parliament voted in favor of a recommendation to criminalise sex workers’ clients, also known as the Swedish or Nordic model. This recommendation was put forward in a resolution by a Member of European Parliament (MEP) called Honeyball and it was strongly pushed for by the European Women’s Lobby (EWL). At that time I was studying about the sex workers’ movement at my university, but I did not speak up about this.

The Swedish model is based on the paradoxical idea of ‘helping’ sex-workers by criminalizing their clients and third parties (a category which includes managers but also drivers or bookkeepers). Even if these intentions to protect women who they see as victims are genuine, the model has proven to be harmful and has increased stigma and violence against women and trans people in Sweden, France and Ireland. The Swedish model does not result in a reduction of poverty, stigma and repression of women sex workers. Quite the opposite, it makes their work more difficult and more dangerous. It encourages the controlling of female migration and has resulted in deportations of women. And to sustain its legitimacy, defendants of the model conveniently ignore and disqualify the dissident voices of sex workers. This happened in Sweden, and this happened at European level.

But the sex workers’ movement did not sit quietly. ICRSE, one of the regional sex workers’ networks in Europe, published a letter opposing the Honeyball resolution that was signed by 560 organizations. They also facilitated an academic critique endorsed by 94 academics that uncovers the bias of the resolution and its claims. And five years later, sex workers continue their protest. In September 2019, at the occasion of the 20 years jubilee of the ‘Swedish model’, activists and researchers gathered in Sweden to discuss the consequences of the model.

I spoke to Luca Stevenson about that period, when he had just joined the ICRSE as the Coordinator:

“The position taken by the European Parliament was, unfortunately, not really surprising. The shocking part was that it was the Parliament, a democratic institution, that made this report. The quality of the report is the proof that statistics can be used for anything, including denying one’s rights. The whole report is based on stigma and discrimination, not on sex workers’ demands or even scientific evidence.” 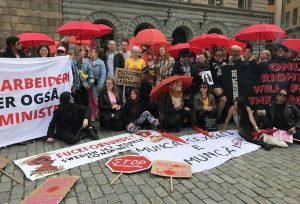 By purposefully conflating every form of sex work with trafficking, the Honeyball resolution denies sex workers the capacity to organize and the possibility to use their own body and social skills to earn an income. According to Stevenson, this is just one illustration of a bigger trend that is happening everywhere:

“Such attacks against the most stigmatised and marginalised groups are all part of a repressive wave of populism. For us, the importance now is to develop an intersectional movement for social justice across the region and across the globe.”

Building alliances with other communities became a priority for ICRSE, both as a strategy and as an end in itself. As Stevenson clarifies:

“We wanted to make it understood that sex workers are also part of other discriminated and criminalized communities – such as LGBTI and migrants – and are often the most marginalized within them. Our aim was to mainstream the sex worker question at both grassroots and European levels.”

For instance, local migrant organizations should be able to provide support for the sex workers within their communities. And vice versa. As Stevenson explains:

“We purposefully became members of different networks. It was very important for us that the sex worker organizations would learn from others and become more intersectional as well, and to address issues of transphobia and racism in our own sex worker rights organizing.”

By making the voices of its members more visible partly though the publication of a series of intersectional resources in their diverse communities, ICRSE intended, step by step, to bring a broad range of allies to the table. As shared by Stevenson:

“As these networks are based on the democratic representation of their members, they should therefore recognize that sex workers are present in every sphere of society. So that sex workers’ rights are, in fact, migrants’, LGBTI, and labour rights.”

And the strategy is showing success. In 2016, Transgender Europe (TGEU) spoke out in support of decriminalisation of sex work, followed by ILGA Europe in 2018 and ILGA World in 2019. More recently also PICUM integrated the decriminalisation of sex work as one of the approaches to support and empower their communities. Other organizations such as Amnesty International (AI) and Doctors of the World (MdM) have also demonstrated awareness that sex workers’ rights are not separate from their own organisational human rights or health focus and that this needs to be incorporated into their work. ICRSE has also been reaching out to women’s organisations, homeless people’s organisations, and sexual and reproductive rights advocates, among others.

What Funders Need to Learn

I then spoke with Nadia van der Linde, Coordinator at the Red Umbrella Fund, about funders’ response to the attacks on sex workers’ rights and the limited funding available for sex worker organising. She agreed there is much that funders can learn from the sex workers’ rights movements:

“The way that ICRSE has been successful at strategically building alliances across movements and communities, including among LGBTI communities, undocumented migrants, feminists, human rights activists and others, is something that I see too little of in funder spaces.”

Not having a portfolio or policy on sex work does not mean sex workers are not already included or affected by a funder’s grantmaking. Communities do not fit neatly into funder-defined boxes. As Van der Linde shared:

“When I ask funders whether they support sex workers’ rights, many funders tell me they ‘do not have a portfolio on sex work’ and therefore cannot fund sex worker groups. While they do have a portfolio on women, LGBTI, health, or HIV! They have still not made the connection or are not willing to acknowledge the overlap, intersections, or implications.”

Legislation passed in the name of ‘equality’ has been detrimental to the health and rights of those most harmed by inequality, while their – sex workers’ – experiences have been systematically ignored or dismissed. Funders concerned about refugees, civil society, drug users, HIV, human rights, women, gender based violence, and labour rights, among others, should all be reflecting on the extent to which their grants are reaching the most marginalized and stigmatized within those communities. In the current social political climate and economic structure, this usually includes sex workers. Funders should be encouraging bridges to be built between communities and movements.

It is through my recent work experiences at the ICRSE and the Red Umbrella Fund that the intersections between movements and necessity and urgency for allies to speak out and support sex workers’ rights activism has become clear to me. If we want to be effective in our fight against the reactionary and populist waves here in Europe, we have to acknowledge that the sex workers’ fight for self-determination is right at its heart and will impact us all.

***
This article was written by Nathan Desvignes. Nathan graduated with a master’s degree in history of political philosophy (a partnership between Sciences Po Lyon and ENS de Lyon) in 2019, specialized in sociology of sex work, history of feminism and history of anarchism. He has a general interest in social sciences: “As a feminist and anarchist activist, the fight for sex workers’ rights always appeared to me as a primary place of intersectionality from which anarchists and feminists have a lot to learn.” While volunteering for ICRSE, the European sex worker network, followed by the Red Umbrella Fund, the only global sex worker-led fund, Nathan wrote his Master’s thesis on the common history of anarchism and sex work activism (in French): “Emma Goldman face au Mann Act de 1910: un regard anarchiste sur la prostitution”